The Way I Live 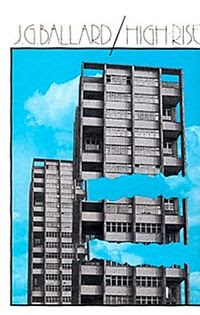 J.G. Ballard's High Rise is a cautionary tale of an opulent apartment complex which goes haywire when the power fails. Before long, this closed system complex (boasting pools, a shopping mall, and a school) descends into madness and decay, until before you know it, the main character is eating roast Pomeranian while watching his co-tenants die miserably. It is a truly horrifying tale of what happens when you rely on technology to take the place of human connection and a real community. When me and my husband Rob moved to Baltimore, we very narrowly missed befalling the same kind of misfortune, and now I will tell our tale of warning to you, dear reader. Be forewarned!

We went into The Promenade totally blind and without an appointment, knowing only that it was an apartment building, and sort of a fancy one, at least based on the exterior and the name. But we were running out of potential places to live in Baltimore, and figured that a building would likely have openings. To set the scene, Rob was wearing a suit that day (he had a job interview later in the day), but I was wearing my usual late spring get-up of a T-shirt, hoodie, and a denim skirt, with all my leg tattoos on display. Also, my hair was a little messed up because I hadn't showered that morning. I was also wearing sneakers. I certainly was not dressed up enough for the front lobby of The Promenade and its two crystal chandeliers, not to mention the Oriental rugs. At that point, I wanted to leave, but a concierge had already spotted us and at that point, it was easier to continue with the tour than to back out. After all, if this was just the lobby, imagine what the rooms must look like!

We got to see them shortly, choosing on the "Plan B" model, a one-bedroom/one-bath apartment that also includes a study. Rental price: $1600. Cost of living is higher in Baltimore than in Pittsburgh, but not that high! I might have had my first clue that I was out of my depth when I tried to argue the price with the concierge. Protip: If your apartment building even HAS a concierge, consider all rental prices non-negotiable.

The apartment seemed nice, if a little smallish, but there was something about it that was... off. I couldn't put my finger on it, until we got to the bathroom and I realized: this apartment has no doors! Not to the bedroom, not to the bathroom, not anywhere! I think I did say something about this design feature to the concierge, but I forget her response. Through all of this, Rob played the straight man, nodding and keeping absolutely silent. He said later that he only did that because otherwise he would have spent the entire time laughing, and they definitely would have thrown him out then, suit or no suit.

Some other things the apartment had instead of doors:
• Wine cabinet, for your Mountain Dew and Coke Zero
• Exposed brickwork and plumbing for that "bohemian" feel
• A balcony you couldn't actually sit on
• Your choice of wall paint: muted green, muted blue, or muted gray. What a selection!

I don't think it's really a good trade-off for complete lack of protection from zombie hordes, but to each their own.

Then she showed us the amenities. First off was the gym. I have already made my feelings about gyms clear, but in case you don't remember: I think they're kinda dumb. Except in the winter, why would you ever go to a gym to get exercise? Granted, sometimes I wish I had a gym membership in the winter because I tend to get pretty depressed then due to the lack of exercise, but the rest of the time? Unless your exercise drug of choice is swimming and you don't live near a clean lake, everything you do in a gym can be replicated outside, and it's free. And also, Vitamin D. Just my opinion, folks. But anyway, it was your typical gym for high-powered executives, right down to the kidney-shaped pools. It looked like it hadn't been touched in months.

We moved on to the TV room, and at that point she asked if we had any questions. I had two, namely: Do any children live here?, and, Do any students live here? Because even though I am neither a parent nor a student, I would much, MUCH rather live with young kids and college kids than in some sterile execu-suite. But I think she misunderstood the way in which I asked my question, because she reassured me that the building was inhabited almost solely by young professionals. No fear, future inhabitants of the Promenade at Towson! You won't have to suffer a whiff of anyone that isn't exactly like you. (I should have asked about the paper bag test.) She concluded the grand tour by taking us back into the lush lobby and saying that when people come to see you at the Promenade, you can greet them in the lobby, so that they can quote-unquote "see the way you live."

We thank her, both of us sort of shaky: Rob from holding in his laughter, me from wondering why Rob was being so quiet, and hoping that he wasn't infected with some kind of ultra-contagious yuppie flu that would delude him into thinking this place was a good idea. We stumble to the car and as soon as we're in we both burst out laughing, and shortly after found our current place, which isn't perfect (it's way too big, and I'd rather live closer to the city), but is at least not evil. Seriously, every time I pass the Promenade at Towson I get chills. Although that could be because it's April.

I know that some people would really enjoy living at a place like the Promenade, where you don't ever have to leave your lush suite except to go to your high-powered investment banking job, but I was reminded not only of High-Rise but also of the character Jack Bohlen in Martian Time-Slip, whose schizophrenia only starts manifesting itself after he starts living in a self-contained co-op. I think there was an episode of the new Outer Limits about this, too. Clearly, I watch/read far too much science fiction. If you need me, I'll be behind a locked door in my nice safe robot-proof house, reloading the rifle, when the metal ones rise to destroy us all.


(Addendum: as online reviews of the Promenade reveal, it is not really this swanky and Stepfordish. Residents complain about dog poop in the hall, "low life people"--gee, wonder what they mean by THAT--coming in and using their amenities, the hot water turning off, appliances breaking, etc. So it really isn't any different from a "normal" apartment complex except that it's about $500 more than average. I think we'll stick to living in houses; it's not like there's a lack of free-standing rental houses in Baltimore.

Also, I wish I would have kept the brochure they gave us when we took the tour; it featured a guy in a tux dipping a woman in a ball gown, and she had a red rose between her teeth. That is a great, on-target advertisement for an apartment building.)
Posted by Erica L. Satifka at 4:35 PM