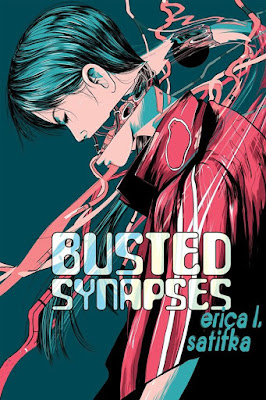 The world of tomorrow holds wonders unlike anything humanity has ever seen! But only for those lucky few.

Alicia, a runaway New Woman, comes to small-town Wheeling, West Virginia, and gets entangled with Jess and Dale, throwing their lives of pointless work and drug-fueled virtual reality into chaos. Meanwhile, truths are uncovered of the nation’s rewritten history—truths powerful corporations would rather leave hidden.

​“Johnny Mnemonic goes Millennial. Cyberpunk is not dead, and Erica Satifka is its queen.” (Silvia Moreno Garcia, award-winning editor of She Walks in Shadows)


“Busted Synapses is the cyberpunk cry of Generation Screwed—a shrewd look at transhumanism through the lens of insurmountable debt and a thoroughly dehumanized workforce. A stunning novella from a unique voice in the literary class war.

“Satifka is a working-class writer for our incomprehensible times, turning out endless truths in fiction and speaking for a generation lost in debt and dead-end jobs. This novella cuts through the cyberpunk future we were promised like a high-interest credit card lining up ketamine dropped off by a drone. Do lines of this book and dream of your own electric sheep.

“A book for the people whose lives are all online and whose friends are always on the brink of unlivable lives. Busted Synapses is the kind of painfully true that only great science fiction can be: it reads the future in video cards and credit cards and shows us fear in a fistful of medical bills. A grim and bitter triumph.” (Meg Elison, author of The Book of the Unnamed Midwife)


“What constitutes a human life? Erica Satifka asks that monster of a question in Busted Synapses, and the answers offered aren’t for the faint. With poignant sensitivity and science-fictional rigor, Satifka proves herself an uncanny chronicler of the human—and inhuman—condition.” (Jason Heller, author of Strange Stars)