A Banana-Cream Pie Dropped from a Stepladder: My 2016 Award Eligibility Post

So we seem to have entered the time of year when I have to look away from the trainwreck of American democracy and list the works I've had published this year! Between the election and -- okay, it's all election -- I haven't been doing much writing or submitting. I only had four things published this year, which is half of what I had published in 2015 and and also 2014. As a certain President-elect would say, sad!

However, one of them is a novel! Stay Crazy is 65,000 words of paranoid Walmart alien fighting action, and it's already gotten some amazing reviews on Goodreads and Amazon. As a debut novel, it's eligible for all first-novel awards as well as the standard ones, and while I'm not convinced a little book like this has a hope of being nominated for a big-time award, I'd be honored if folks would consider it. (And for the rest of today, November 28, it's available for 40% off directly through Apex.)

I am also equally proud of my short story "After We Walked Away," which was published last week by Apex Magazine. It's an answer to Le Guin's story, but a million times more dark and desperate and gory. It's so new that I haven't really gotten many reviews of it yet, but people who've read it seem to be digging it, and at 3700 words it's also a bit on the short side. If you know Ursula, feel free to send her a copy, I'm too scared.

The other stories I had published this year are "Human Resources" in Fireside and "The Panoptimom" in Ember: A Journal of Luminous Things. They are also good stories that don't take much time to read!

If you like my story or book, or any others, you can list it/them on the SFWA Reading List if you're a member, or on your own site if you're not. Trust me when I say that no matter how dire things in the world are right now, every writer still feels a little lift when someone says they like our stories, and it lasts until the next time we check Twitter.
Posted by Erica L. Satifka at 8:00 AM

Survived another contentious Thanksgiving dinner? Celebrate with cheap books from the Apex Publications Black Friday sale!!! From Black Friday to the snort-inducing neoholiday of Cyber Monday, you can get a copy of Stay Crazy or any other Apex book for 40% off! For the math-challenged among us (like me) that means you can get the ebook for $4.20 (heh) and the paperback for $9.57. All orders of physical books above $25 also receive free shipping! Just use the checkout code GIVE16.

Already have my book? Then check out Jennifer Pelland's Unwelcome Bodies (one of my top five single-author story collections), the varied mil-SF anthology War Stories, or E. Catherine Tobler's transcendent 2016 novella The Kraken Sea. Or anything else! You know you want to buy books anyway, so get them from the small-press source instead of giving Amazon your business.

(However, if you have a moment to spare, please leave reviews on Amazon and Goodreads! They really do help.)
Posted by Erica L. Satifka at 8:00 AM 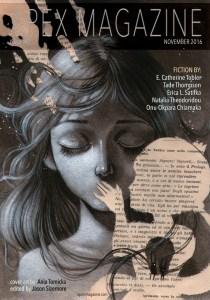 First of all: Yep, world's a shitshow. I'm not gonna go into politics here not because I don't want to but because this blog is pretty much a dumping ground for my con schedules and reviews of my book and stories. If you want to know my up-to-the-minute thoughts on the waking nightmare we all live in you can check out my Twitter and Facebook.

1:00 pm - 2:00 pm: Women Role Models in Science Fiction - Are there any good female role models in science fiction? Or are they still relegated to being damsels in distress? A discussion of both weak and strong female science fiction characters across all media.Christina Hartley, David Weber, Erica Satifka (M), Mike Shepherd

6:00 pm - 7:00 pm: We Can't Talk to Flipper, so How Can We Talk to Aliens? - The real problems of inter-species communications, and things we might be able to do to deal with them. Universal translator? Let's start with *a* translator. Erica Satifka (M), Gerald Nordley, Howard Davidson, Peter Wacks


SUNDAY
11:00 am - 12:00 pm: The Death of the Stand-Alone Book - Trilogies, tetralogies--we're not even sure of the right names for five, six, seven-book series! Where does the madness end? Is there no market any more for non-series books? Diana Francis, Erica Satifka, Maura van der Linden, Tori Centanni (M), William Hertling

1:00 pm - 2:00 pm: Structurally Speaking - Stories have rhythm. Is there One True Pattern, or can we mess with it? Are we really bound to the Hero's Journey, or are there other models? David Boop, Erica Satifka, John C. Bunnell, Sharon Joss (M), Theresa Reed

And that's it! I will also have copies of Stay Crazy both in the dealers room and with me if you'd like to get one. I'm told it's quite humorous, which might make it a pleasing diversion from this hellscape.
Posted by Erica L. Satifka at 8:00 AM