It's award season, the most stressful time of a writer's year, or so I've been told. As winning the British Fantasy Award was one of the best things that has ever happened to me, I figured that it would be a not-terrible idea to list the fiction I've had published this year, in case it happens again? But it probably won't. But it might??

While I didn't write as much this year as I'd hoped to (for reasons possibly to be enumerated in a non-writing-related yearly roundup post I may write but probably won't), I had five stories out: two flashes, two regular size dealies, and one novelette (!). I'll go through them from longest to shortest.

The novelette is "The Goddess of the Highway" at Interzone, which is a new market for me. At approximately 12,600 words it is the longest thing I've ever had published that isn't Stay Crazy (please buy now), and one of my longest stories period. So if you like reading my stuff, well, here's a big old chunk of it. I wrote a post about it here, but the keywords are: prosthetic brains, road trip, socialism, pancakes. It's not available online since Interzone is a print magazine, but you can get the digital issue here or email me at satifka at gmail dot com and I'll just send you the damn thing. (EDIT: This story is now available to read for free at my website at this link thanks to Interzone editor Andy Cox.)

The next-longest short story is "The Big So-So," which is also in Interzone! Just like "Goddess" the print copy features some amazing interior art by Vincent Sammy. This story came out so recently that I'm still behind on writing a "story notes" post about it, but basically it's about a bunch of slackers living in Pittsburgh after aliens hooked the whole planet on happy juice (and then took it away). One of my quirks as a writer is that I write very few stories in the first person, and this was my attempt to write a short story that could only be told in first person, because the way the story is told is just as important as the plot itself. Just like above, you can get the digital issue at TTA Press or email me. This story is around 5200 words long.

Story number three is "Lucky Girl" at The Dark, again a new market, and this one is online! I call it an ontological horror story, and it's pretty damn terrifying to me, although it could also be read as just a straight non-genre piece (but where's the fun in that?). The story notes are here, although they mostly wound up being about Sliders. 3900 words.

Taking up the rear are my two flash pieces, which were both published in Daily Science Fiction. "Attending Your Own Funeral: An Etiquette Guide" is a quiet piece about alternate universes and taking it easy, and "Bitter Medicine" is about humans being human (that's bad). I don't usually have much to say about flash, even when it's my own, but if you've only got a few minutes and you really want to read a Satifka story, well there you go.

So, that was my year in publications. Not quite as prolific as 2014 and 2015, but better than last year, because let's face it anything was better than last year. If you like any of these stories, feel free to recommend them or (if you're a SFWA member) put them on the Nebula Suggested Reading List ("Goddess" is already on there, which makes me incredibly happy). And here's to hopefully a 2018 with even more published work, which means I have to write more stuff, because except for solicited pieces I'm fresh out. Maybe I shouldn't admit that. Well, can't erase it now.

(Oh, and if you're wondering whether these stories are fantasy, science fiction, or horror? Yes, they are!)

Capitalism ahoy! For the next five days (all the way through "Cyber Monday") you can get all books in the Apex catalog for 30% off with the code CHEER17. This includes my British Fantasy Award-winning novel Stay Crazy, which you probably already have if you read this blog, but on the off chance you don't well now you can. 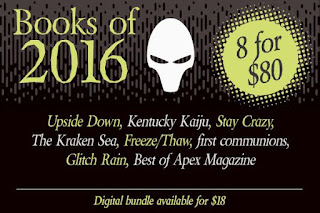 In addition, year-themed packs of Apex novels are on sale, with the 2016 one (which includes my book and seven others) a mere $80 for print and $18 for digital. You can get it here. It's a good chance to stock up a lot of books for your home, school, library, place of business, or just to build a cool fort.

Starts before whenever you read this, ends November 27!
Posted by Erica L. Satifka at 8:00 AM

OryCon 39 is this weekend! Specifically, November 17th - 19th at the Red Lion Hotel in Jantzen Beach. Here's where I'll be:

Literary Techniques: Awesome or Snobby? (7:00 pm - 8:00 pm) - Literary fiction and genre fiction has been at odds for a long time, but they don't have to be enemies. Learn some literary techniques that will help improve your writing and take you deeper into your story. You may even end up with a great reading list of 'literary' genre fiction that will challenge your preconceptions about literary fiction and literary devices. Jeff Soesbe, Erica L. Satifka, Laurel Anne Hill (M), Leigh Goodison

Escape With Us! (5:00 pm - 6:00 pm) - While film is often used to explore complex social themes and situations, the movie theater also functions as a refuge from reality. The nature of the escape changes depending on the larger social landscape. Does the current proliferation of films about super heroes and live-action fairy tales reflect a cultural desire to be rescued, or is it something else? Erica L. Satifka (M), Judith R. Conly, Marshall Ryan Maresca, John M. Lovett

Crime and Fantasy (8:00 pm - 9:00 pm) - From vampire assassins to wizard private eyes to undead thugs, crime has been mixing it up with fantasy for years. What is it about crime, noir, and the paranormal that's so appealing? Also - what are some really good titles? Erica L. Satifka, Fonda Lee, Diana Pharaoh Francis (M), Marshall Ryan Maresca, Rory Miller

I'll be selling copies of my British Fantasy Award-winning novel Stay Crazy for $10 (the "get these excess book copies out of my house so I can fill that space with candy" price) at the autograph session, and reading from my newest short fiction publication "The Goddess of the Highway" at the reading. And... that's it! See you there!
Posted by Erica L. Satifka at 8:00 AM