Story Notes: "The Goddess of the Highway" / New Flash Story! 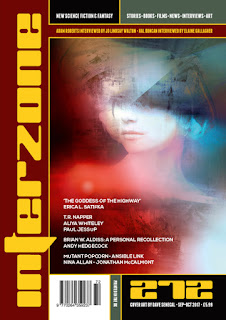 So now that the magazine it's printed in is almost off the shelves, I figured I'd blather a little bit about my novelette "The Goddess of the Highway." It appears in the September/October issue of Interzone, and it's the longest story I've ever had published aside from Stay Crazy. The beginning:

He’s tired and wired all at once. His shoulders ache with the tension brought on by the bennies, and his teeth have worn down to nubs. He can hear them grind even through the soothing tones of the in-cab entertainment system, which is currently broadcasting soft piano paired with roundish blue-green shapes.


Like a lot of my stories, "Goddess" was inspired by something I hate, specifically the movie Idiocracy. If you haven't seen it, Idiocracy is about a dysgenic future where only the stupid have bred, so people water their lawns with Gatorade and elect a pro wrestler as President. (Hey, our President only guest starred on wrestling!) Of course, as everyone knows intelligence is impacted very little by genetics, and environment is by far a larger factor.

In "Goddess," intelligence-destroying bombs ruin people's brains, requiring prosthetics to replace the lost functions. And of course, the prosthetics are coded by color and material, running from Plastic (the lowest caste) to Platinum (people as smart or smarter than today's geniuses). A Plastic-plated truck driver named Harp meets up with a Platinum rebel with an unclear cause named Spike, and together they might just figure out the secret behind the bombs, and a way to fix everything. Oh, and there's a metaphysical being that appears whenever you've taken way too many amphetamines, because yeah.

Under the influence of the neurobombs, society has become static. Like in Brave New World, humanity has been strictly corralled into castes, but their limitations are not inborn. Desperate to get their old brains back, lower-caste humans gobble up smart drugs, but those are only a temporary reprieve from the cruel system. What's needed is revolution, but what kind of revolution can you have in a world where most of the citizens can't even remember how to tie their shoes? Well, you'll see.

This is also a commentary on artificial scarcity and how it's used to control working-class people. There's nothing keeping everyone from having the best prosthetics, just as there's nothing keeping us from socialized medicine or a better public education system or luxury gay space communism. Nothing, that is, except our own need to control other people. Of course, once the society of "Goddess" is set up, it's hard to break out of it. Even if the limitations are not inborn, they're still there. Most of the people in the story are only vaguely aware they're being oppressed, which makes the task of toppling the social order even harder. And then there's the ontological mystery of the Goddess herself, who might be real or just a figment of Harp's shattered mind, or maybe it's some kind of Schrodinger's Cat thing. So it's a lot of my favorite themes all wrapped up in one super-sized piece of fiction.

It's not online, but you can buy the issue here, and also on Amazon if you so wish. I'm immensely proud of this story, and super stoked to have made a sale to Interzone.

Also, I had a flash story out yesterday! "Bitter Medicine" in Daily Science Fiction is the story of an alien hunter/medical researcher who does what humans do best. If you didn't already know I was a huge misanthrope, well, now you do. Go and read if you wanna.
Posted by Erica L. Satifka at 8:00 AM