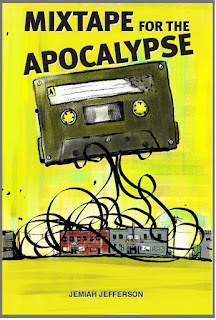 In closing, Mixtape for the Apocalypse is one of the best books I've read in months and well worth your $2.99. I also hope Jefferson writes, if not a sequel, at least more books in this vein. My highest possible recommendation!
Posted by Erica L. Satifka at 6:47 PM 29 comments:

Short Fiction Round Up: January 2013 (more or less)

It's a few days late, but here's the list of the best short stories I read in January and the first few days of February.

"The Golden Age of Story" by Robert Reed: I've been aware of Reed for almost a decade now, since he was published all over F&SF and Asimov's (where this story appeared, February 2013 issue) when I started reading those magazines on and off back in the early aughts, and also saw his name occasionally in the online magazines. But for some reason, I always ignored his stories when I encountered them. Maybe I read a "bad" one and just instinctively stayed away. But I doubt I'll ignore his name after reading this, a masterfully woven series of vignettes about an experimental nootropic that turns its users into geniuses and pathological liars, and the ramification on society when a significant percentage of its members are reporting from a reality vastly different from the one we inhabit. In some ways "The Golden Age of Story" reminded me of the "neuro-SF" of Daryl Gregory, a.k.a. the best writer I discovered in 2012.

"The Wanderers" by Bonnie Jo Stufflebeam: Our broadcast transmissions got out to deep space, and attracted alien visitors who love ultraviolence just as much as humans. The group of aliens named for our cultural heroes come to rule us, but when they arrive, we're already gone. A tromp through "city and suburb" reveals no humans to conquer, but plenty of sights to interpret through the lens of creatures that have only known humanity through our broadcasts, yet perhaps understand us better than we do ourselves. The humor in this story is also not to be glossed over, as the alien warlords pay homage to our "goddess Herbal Essence" or describe the post-apocalyptic wasteland as "no explosion marks... more like The Road." I'd never heard of Stufflebeam before this, but definitely looking forward to watching her career.

For the past few months, I've really been enjoying plowing through a few collections of Robert Silverberg's short fiction that are cheaply available on Kindle. Silverberg is not the first name one thinks of when thinking of New Wave science fiction, and I wonder why. Maybe because he started as a pulp writer, which is more an accident of timing than of any lack of quality on Silverberg's part. Some aspects of his stories are outdated, but they're from the sixties and seventies, so what do you expect? The stories in Volumes 2, 3, and 4 are all quite good, but some representative stories that I thought were especially good were "Schwartz Between the Galaxies" (an anthropologist struggles to continue his work on an Earth with one homogenous, globalized culture), "Hawksbill Station" (what Terra Nova could have been if it wasn't fucking awful), "When We Went to See the End of the World" (darkly ironic story about apocalypses both futuristic and present day), and "The Wind and the Rain" (in which we're reminded that conservation shouldn't be about saving the planet, it should be about saving humans) Seriously, I could have listed about a dozen stories here. It always does seem silly to review things this old on a blog but if you like New Wave SF or are just interested in reading some then buy these, especially if you have a Kindle.

"During the Pause" by Adam-Troy Castro: Of course I'd like this story, it's just one long damn hypothetical argument. An alien transmission describes a "phenomenon" that will soon (and you will eventually find out just how soon!) overtake the Earth. There is nothing we can do to stop it. The horrific phenomenon is described in ghastly detail, even as the alien message laments that much of it is untranslatable. There is something we can do, doomed as we are, to make our existence meaningful. But it comes at a cost. Anything more would ruin the story, which you should just go read. I thought about this story for like two weeks after I read it, and it's still in my head.

That's all for now. As per usual, if you know of any short stories that I should have already read, link them in the comments.
Posted by Erica L. Satifka at 12:11 PM 5 comments: