In case you missed it, the audio version of my story "Loving Grace" came out a little while ago on the Clarkesworld site. So if you like stories, but hate reading, give it a listen. Thanks to Kate Baker for the excellent narration!

While I think the story is fairly self-explanatory, notes seem to be the thing to do, so I figured I'd talk a little more about what inspired the story. It springs (sprang?) from one simple question: Why do we still have a forty-hour workweek?

Because when you think about it, we shouldn't. Advances in automation should have made our lives easier, but instead, people are working longer hours than ever. What makes it even worse is that so many of the jobs that we do are unmitigated bullshit. The job I have now is real, but I'm sure I'm not the only person who has had a job warming a desk for hours upon hours a day, not really doing much of anything at all. What is a "project manager"? Machines are taking our jobs, which is a good thing (as Marybeth says in the story, "machines can do things better than we ever could"), but we aren't seeing the benefits of automation, only a shift into jobs built on endless paperwork. Politicians talk about "job creation," which is another way to say "make work." Nobody is saying the obvious: that we need a Shift in the way we think about jobs and money, that we are closer to fully automated luxury communism than we know.

In the world of the story, luxury communism is within society's grasp. But because of the American work ethic, nobody is willing to just accept the fact that capitalism is transitory and enjoy this bountiful stage of advanced civilization. Or rather, they might accept it... except that the government has made it illegal to revel in your fully automated life. So in addition to the employment lottery, things are shoddier than they have to be. The characters could have real food, fine clothing, adequate transportation, but they haven't "earned" these things. Hell, setting up a draft and keeping everyone cowed is more work than just letting utopia reign, but living in luxury without "earning" it is obscene. Never mind that there is no actual way to earn it! The workers are psychologically invested in this racket as well (e.g. draft volunteers, Chase being anxious about the Shift instead of joyful, and so forth).

I believe in a basic income. I believe BI is the pathway to post-capitalist economic liberation, and that if we had one, scientific and artistic progress would skyrocket. But we'll never get there if people who stand to gain the most by a massive automation-fueled economic Shift remain obsessed with "welfare queens" and the concept of "earning" things we should have by rights.

So anyway, that's the story. Read or listen! Support basic income!
Posted by Erica L. Satifka at 8:00 AM 4 comments: 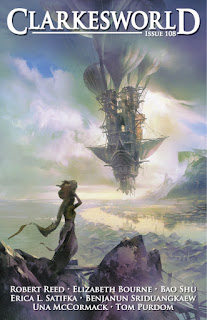 
This issue also features fiction by Robert Reed, Bao Shu, Elizabeth Bourne, and many others! I'm not going to break my usual pattern of not talking about my stories, but I will say that the article "On the Phenomenon of Bullshit Jobs" by David Graeber was a huge inspiration for this piece, and of course this poem by Richard Brautigan. Read it if you want to, and let me know what you think!
Posted by Erica L. Satifka at 8:00 AM 2 comments: