It's a new story day! (Actually, a double-new story day, but I'm saving the other announcement for later.) This month in The Dark is "Lucky Girl," a little bit of parallel-dimension existential horror. A clip:

Mike’s sister Natalie had attempted suicide on eleven separate occasions, each time using a different method. Cutting her wrists, knocking back three family-size bottles of Tylenol, hanging herself with a hospital bed sheet, jumping into the Columbia River with a bag of stones around her waist. She’d even gone into the woods smeared with bacon fat and gotten herself mauled by a cougar, which only seemed ridiculous because Natalie had survived with barely a scratch. If she hadn’t, it would have been tragic. 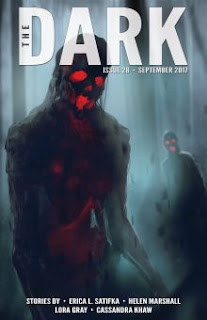 The background: In the nineties, there was this really bad show called Sliders that I thought was very good, because I was a teenager. It was about a group of people who traveled to parallel worlds where a minor change in the past caused reality to branch out, and it blew my mind. Were parallel worlds real? What caused them to splinter off? Could my everyday actions cause a parallel world? If I were smart, I'd have gone into physics, but instead I became a science fiction writer.

A few years after I stopped paying attention to Sliders (the show having gotten too bad even for me), I discovered a band called The Eels, which happens to be fronted by the son of the man who created the many-worlds theory, Hugh Everett III. In case you don't want to click through that Wiki link, just know that the Everetts' story is interesting as fuck. The Eels' best album, 1998's Electro-Shock Blues, is about the frontman's sister Elizabeth, and this is the part where I start relating all this background information to the actual story.

Elizabeth Everett, like Natalie in "Lucky Girl," committed suicide in order to travel to a different parallel world. Hugh himself neglected his health after coming up with the many-worlds theorem, and died at the age of fifty-one from preventable causes. These things are tragedies, but it made me think about how thoroughly an idea can shatter someone's world... and this being science fiction, about what happens if that idea turns out to be true.

The thing about quantum immortality that makes it horrific is that it's deeply solipsistic. If you're the only constant in your universe, you can die over and over again without ever reaching what Natalie in the story (yes, most of these story notes are only tangentially about the story, I realize that now) calls the "zero point zero zero zero zero one universe," the one where you're least likely to be alive. After a time, it would wear on you, to have a "life track" where you're the only real inhabitant. Far from being something desirable, quantum immortality would kill your soul, and once you'd shunted yourself into more than a handful of "split-offs," it makes sense that you'd keep dying over and over again. Because what else is there to do? Might as well keep traveling now that you've gone this far. And if you die when you're old from natural causes? Then expect an infinity of parallel worlds, where your mind keeps flipping into a succession of nearly identical hospital rooms, trying to survive. Better hope you're not in any pain!

Basically, what I'm saying is that I desperately hope Hugh Everett III was full of shit.

So anyway, that's "Lucky Girl," or at least some rambling about things kinda relating to the story but not really. Physics are wacky, guys. Oh, and listen to The Eels. Here's the opener from the album, "Elizabeth on the Bathroom Floor."