In light of being nominated for the British Fantasy Award for Best Newcomer (!!! <--this is still deserving of multiple exclamation points), and it being my first award nomination, and having the ability to splurge on a major trip for which I am extremely grateful, I'm going to England! Rob and I will be in London for a week, followed by a few days in Peterborough for Fantasycon 2017. If you want to actually see pictures of and commentary on the trip I'll be dropping them on Twitter and Facebook. I'm also going to be on two panels at the con, and here they are! Both of them are on Saturday, September 30.

New Author Experiences (1:00 PM): Every writer has a different path towards getting their work published and finding an audience. Join a selection of new writers on this panel who are experiencing different parts of the process and listen as they compare their journeys. Phil Lunt (mod), Jeanette Ng, Anthony Laken, Erica L. Satifka, Kevin Elliott, Joseph E. Cole

Being BFA Nominees (4:00 PM): An award nomination can be a great confidence booster for a writer. It can also lead to all sorts of new opportunities. Our panel of BFA nominees will discuss what got them to this stage and what they hope their nominations will bring in the future. Ian Hunter (mod), Erica L. Satifka, Pete Sutton, Neil Williamson, Phil Sloman

I will also have copies of Stay Crazy for sale in the dealers' room and would like to make space in my luggage for books and touristy things, hint hint.

And finally, in short fiction news, my novelette "The Goddess of the Highway" is out in the current issue of Interzone (272), along with stories by Paul Jessup, T.R. Napper, and Aliya Whiteley. I'm waiting to talk about the story until people have gotten copies of the magazine and read it, but in the meantime check out the gorgeous story art below by Vincent Sammy, which pretty much nailed my own mental picture of the titular character. 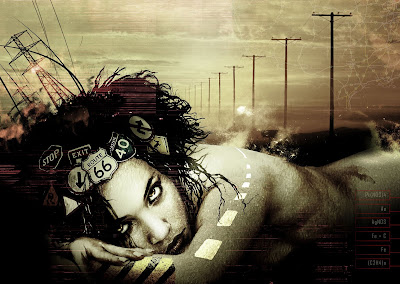