Even though I've only been cycling seriously for a few months now, I've already learned some Important Truths about biking in a semi-suburban area. Background: Towson is a college town, but its proximity to Baltimore means that it's ironically or not less centrally organized than a typical small town. In a way, the history of Towson is sort of emblematic of America: quaint college town drowned by a wave of sprawl during 1950s white flight, so that while there is still the skeleton of a town here, a lot of it has been ruined by car-lovin' suburbanites who work in Baltimore and drive everywhere. There isn't a neighborhood grocery store anymore (it closed soon after we moved here... coincidence?! (yes)), there's only a strip of "downtown," and most of one's shopping and entertainment is done at big-box stores, complexes of which are at regular intervals from one another. And while I no longer feel like I'm going to die navigating the Target parking lot, it is still not an infrastructure built for cyclists or pedestrians. There aren't even any bike racks in the town itself, which means I actually prefer Target, since they actually have one (or a structure that works just as well).

Where was I going with this? I don't know. On to the tips!

1. Sidewalk riding is inevitable. Believe me, I already know all the anti-sidewalk riding platitudes. It's something children do! No wonder people hate cyclists when they're knocking over old folks and the disabled on sidewalks. Ovary up! And I agree, largely, with most of them: the best place for a bike to be is usually on the road. But I notice that people in the cyclosphere most adamantly opposed to cruising the sidewalks come from NYC, Portland, or other similarly bike-friendly places. Well, shit, it's not exactly hard to avoid the sidewalks if you live in Portland, you know? If we move to Baltimore City this summer, I'm not going to ride the sidewalks anymore either: for one, it's illegal; for two, the maximum speed limit in the city is 25 mph, which means actual car speeds of around 35, and I feel comfortable riding in that kind of traffic.

But on a 40 mph road, which actually means 55? Hell no. I've heard all the statistics about how you're very unlikely to get hit from behind, the only real danger is in turning, just stay confident and you'll be fine on any road. But those are city cyclists riding on city roads. I can't buy that riding on a deserted sidewalk is less safe than "sharing the road" with truckers who have daily bowel movements larger than you and your bike put together. And suburban/small-town governments know this, which is why it's not usually illegal to ride on sidewalks here, and shouldn't be.

And here's the thing: I've ridden five-miles-long stretches of suburban sidewalk and seen not a single pedestrian. People in suburbia just don't walk anywhere, so why shouldn't someone use it? Well, there are still some good reasons: sidewalk maintenance lags behind road maintenance (I've seen sidewalk potholes that would swallow a young child), there are often obstacles like telephone poles and mailboxes, you have more chance of getting a puncture from broken glass (although the only puncture I've gotten so far has been from a carelessly tossed beer bottle on the road). Plus, sidewalks are just not as pleasant to ride on as roads, being by their very nature of inconsistent width and composition, and prone to ending at random intervals. (I don't know how obligate pedestrians with physical disabilities deal with it... sometimes you're walking/riding along, and you either run into a section with no curb cuts, or there's just no sidewalk for a block for apparently no reason. And while it's fairly easy for me to cut onto the road or someone's front lawn for that block, it's a lot less easy for someone with a disability. Just one more example of how sprawl oppresses everyone.)

So, you might have to ride on the sidewalk, but there are things you can do to be less of a jerk about it.
• Always yield to pedestrians. If a pedestrian is elderly or disabled, or there are a lot of pedestrians (again, very unlikely in suburbia, but a possibility), hop off and walk around them. This does mean having to keep a fairly slow speed but your speed will be slower on the sidewalks anyway.
• When crossing a street on a sidewalk, act like a pedestrian. Of course, cars are supposed to yield to pedestrians crossing on the sidewalk too. But in actuality, if you're an obligate pedestrian you know that pretty much every car is out to get you. So wait for the walk sign if there is one, and if not, be timid as a mouse.
• "Timid" is how you should ride most of the time when you're on the sidewalk. You're really NOT supposed to be there, so act like a tourist, not a citizen.

2. You are a novelty. I know I'm not the only cyclist in Towson. I have seen them: almost always male, usually African-American, often riding BMXs. And of course, there is a lot of biking at the college, judging from the number of chained-up fixies around campus. But even if they see us every day, to the suburban/small town driver you will always be just slightly less odd than a guy in a clown suit riding an ostrich.

Having recently attended driving school, I know that future drivers of Maryland are given next to no instruction about cyclists. There was a brief mention of the three-foot rule, a comment from the instructor about how "bicycles shouldn't be on roads," and that was it. And of course, bicyclists don't have to attend any instruction at all in order to ride, which is as it should be (requiring a license to ride would mean the death of cycling). But still, one thinks that a comprehensive driving program (it was thirty hours of instruction) would include some information about the most commonly encountered non-motorized vehicle on Maryland roads. But I guess one has to carve out time for rape apologism.

Drivers express their surprise at seeing a cyclist on the road in a number of ways. The most common response is "bike!" said in the same manner as "dog!" or "fire!" Not really that annoying. There are also the people who will tell you to get on the sidewalk if you're on the road, and vice versa. (And no, we don't have bike lanes here, it's one or the other, folks.) And then there's the lady who, when coming up from behind me, slammed on her horn with all her might and kept it on as she passed me, her beady blue eyes glued to my face like I was the Devil's daughter. Please don't be that lady. Just... don't.

3. Get confidence, stupid. Yeah, so even though most of this entry is about how you should ride on the sidewalk if you feel scared, when it's safe for you to be on the road, own that road, motherfucker. This is something that has taken me awhile to learn, since I find traffic terrifying even when I'm in a car. But roads were originally built for cyclists and pedestrians, and even though it's not a good idea anymore to jog down a 30 mph road (although I've seen it done... no sidewalks sometimes, remember?), if you're on a bike you have as much right to be there as a car. You may not be able to go as fast as a car, but it's a speed LIMIT, not a minimum speed. Sorry, Autobots, you'll just have to spend an extra two minutes on the road today, on your journey from your sealed-off air-conditioned office to your sealed-off air-conditioned home. 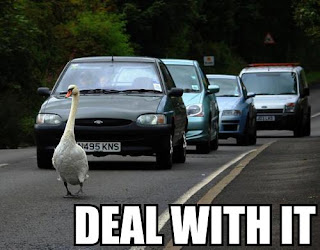 If I had the option of using bike lanes, I would. But since I don't, the next safest place to ride is square in the center of the lane, or maybe a little bit to the right (cars drive on the right in the US). I don't like riding in the extreme right, due to the fact that the pavement is usually crappier there, there's a chance you might scrape up against the side of the sidewalk, and there are often drainage ditches which can be a hazard. Also, riding in the center forces the driver to recognize that you exist and hopefully give you the mandated three feet of space. If you're in his peripheral vision, it's easy to misjudge and not grant as much space. Yeah, drivers will be pissed. I even had a cop cross the double center line on the residential stretch of Joppa Road to get around me, which was hilarious. But if you've been around the Lancaster, PA area and seen the Amish buggy drivers, you know that they don't take crap from anybody. Be confident. Be Amish.

I'm sure there are more things I could mention about being a semi-suburban cyclist but it's very sunny out so I think I'll go for a ride.
Posted by Erica L. Satifka at 1:49 PM

Email ThisBlogThis!Share to TwitterShare to FacebookShare to Pinterest
Labels: excursions in pedaling, listomania