First of all, my story "Five Days to a Better You with Parallel Worlds (Executive Edition)" went live at Daily Science Fiction last week. A sample:

Mandy the receptionist will press the alarm when you burst into the room, but that doesn't mean you should be alarmed. In the real universe, the one you come from, her name is Sandy. She loves cats. Flash those pearly white teeth of yours.


Second of all, the newest issue of Shimmer is out and it contains my story! "We Take the Long View" is a story of telepathy, colonization, body horror, and evil forests. The story will be online in mid-October but you should really buy the issue now.

In non-writing news, I finally put my feet into the Pacific Ocean:


Rob's parents came to visit and they wanted to go to the beach, which I was very excited about since I have never seen the Pacific Ocean and one of my friends said the Oregon Coast is one of the most beautiful places on Earth. We didn't get to see the sunset, but even so, I can see the appeal. The first beach we stopped at was pretty wild, with rocks jutting up from the coast and mountains in the distance. It was cold, and there was an old shipwreck on the beach. We spent the night in the very cute town of Astoria where I somehow managed to crash a loaner beach cruiser. On the second day, we went to the town of Seaside, OR, which reminded me more of the beach towns on the Atlantic. The beach there was also much more "tame," though there was some grass and of course the mountains over the horizon. There was also a swingset. There aren't many things in life more relaxing than swinging on a swingset while facing the Pacific Ocean on a hot (but not too hot) day.

Clatsop County is also the ancestral home of Bigfoot:


We also went to Lewis and Clark's winter fort. Man, Oregon is just lousy with Lewis and Clark stuff. It's like that's the most important thing that's ever happened here. (I can't judge. The only historical thing that happened where I grew up was a battle from a war nobody cares about anymore.) We ate some really good vegetarian burgers at the Coast, drank some excellent microbrews, and fed seals at a small aquarium that has its own Wikipedia page. After getting back, we took Rob's parents to Powell's and I failed to convince them to eat at a food cart. Then on Sunday we went to Mount Hood, which was very impressive. I've never seen a real mountain up close before, and it was actually a little terrifying. There's a sign at the hiking station that basically says "if you get stuck up there, you're on your own." (Fine, Mount Hood. Be that way. I guess I'll never find out if you're filled with candy.) I have pictures of this stuff too, but there are already too many pictures in this post.

And finally, a picture that proves once and for all that Portland truly is Etsy's brick and mortar storefront: 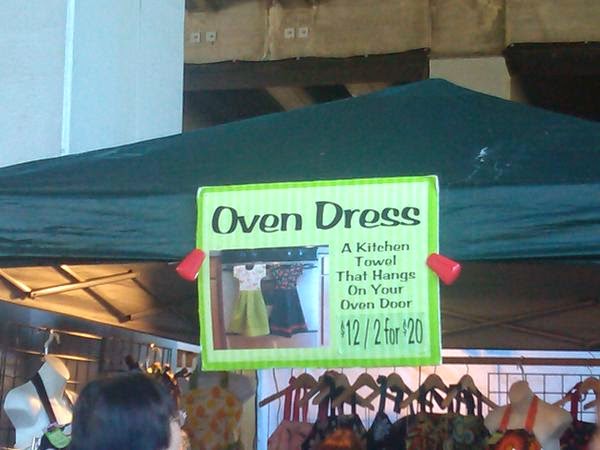