Reality Doesn't Have to Suck: That GM Ad 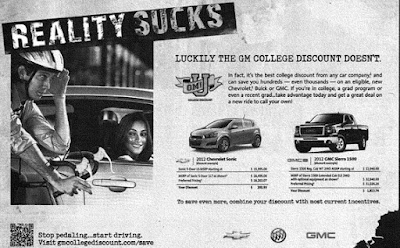 There was some predictable outcry over the above General Motors ad a few days ago. Basically, the ad is terrible and so is GM (for a much bigger reason than this). But, IDK, I can't get as fired up about this as others.

I think my take on it was a little skewed compared to the rest of the bikeysphere. The "Reality Sucks" line struck me at hopelessly nihilistic, and definitely connected to the car (as it's a car ad) instead of the bike. As Rob likes to tell me when I go on about hating cars and driving, driving is a reality, and it's not going away, and yes, for most people it does suck. Yet, why a company would want the term "sucks" to come anywhere near their product baffles me. Fast food is often a necessity in our modern lives, but would you see Burger King running a commercial where a family is sitting down to a nice home-cooked meal, and then there's a cutaway to a dad rushing home with a bag of Whoppers? "Reality sucks, stop cooking, eat BK." No, because it's insane to compare your product to a slower, yet far more fulfilling alternative. Likewise, cars are a tool, ones that are often a necessity in our modern lives, but being reminded of this "reality"... does not strike me as the best way to go. If anything, it might cause someone to think "Hey, yeah, driving DOES suck! Wait, you can ride a bike to work, like it's a car? Does that suck as much as driving does?" Putting your competitor's product in your ad is a risky venture, and should only be done if you're absolutely certain your product is superior. It isn't at all clear that driving in areas that allow for transportation cycling is superior (in fact, proving that it's inferior is sort of the point of bicycle advocacy, right?), so really, the main thing I take away from this is GM is a self-hating corporation which is secretly engineering its own downfall.

The pictures further fuel this interpretaton. For one thing, the cyclist is attractive! He's not really my own type, but he's definitely got that generic advertising-model look going on. And while he's not smiling, he also doesn't have a doomed expression on his face saying "oh, man, I wish I had a truck right about now." He looks like he's concentrating, which I can understand, as my own face tends to scrunch up when I cycle, to the point that I look like I'm probably not enjoying myself very much. The girl in the picture, meanwhile, is smiling at him. Not sneering, or rolling her eyes, but genuinely smiling at him, even if she's WAY too close. Meanwhile, she's not watching the road. Does this mean GM customers are bad drivers?

So, really, my deconstruction of the ad would have to be: "The reality of our current transportation infrastructure is sub-par and often requires the use of a car, which we provide. However, there are alternatives, and these alternatives may not 'suck' as much as our product or others like it. Have we said 'suck' enough? Suck suck suck, our products suck." Awesome pitch for my side, GM! Here, have another bailout.

Of course, that's not what GM was going for by a long shot, I know that. I realize that my interpretation of this ad is influenced by my own hatred of cars (despite their "reality"). Still, I wonder just what they were going for. Nobody who currently has the privilege of being able to ride for transportation is going to "make the switch" after seeing this ad. I guess it makes GM truck owners feel a little better about themselves and their choice to carry around a 3000-pound steel cage. And of course, it got us all talking about GM, which is the ultimate goal of any and all advertising.

The below response ad by Giant is pretty awesome: 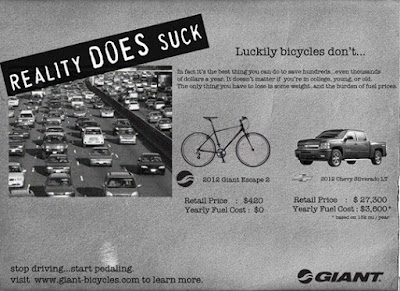 Basically, the fact that a major car company even deigns to "attack" transportation cycling means just one thing to me: they're scared and we're winning. Even ten years ago, you wouldn't have seen an ad like this, because cycling was so on the margins that this ad would have been a waste of GM's ad money. Call me an optimist, but I count this as a victory.
Posted by Erica L. Satifka at 9:37 PM

Email ThisBlogThis!Share to TwitterShare to FacebookShare to Pinterest
Labels: excursions in pedaling, f is for fail, snark huntress