So I am a person who needs a to-do list to survive. Without my to-do list, I have a tendency to flail randomly through my day without much plan at all, considering that I don't yet have a job here in Maryland yet. I'm pretty crap at structuring my own time, due to my ability to get distracted from my "goals" by pretty much anything: a shiny rock, the antics of cats, rainstorms, the Internet the Internet the Internet.

Having a to-do list, though, helps a lot. But there are a few issues. One of my problems with writing to-do lists has to do with the time of day when I write them. I usually write my lists at night, when my motivation and ability to follow through on things is basically shot. Night-self can't accomplish shit. But night-self also sees all the things that day-self has accomplished, and comes to one conclusion: day-self is a genius.

So night-self loads day-self's list with stuff that she thinks day-self will be capable of, and she is very optimistic. Night-self has complete faith in day-self, the confidence of the half-asleep and therefore only semi-conscious.

Day-self, of course, is not a genius. Though considerably more productive and organized than night-self, the fact is that these lists would be impossible for almost anyone to complete fully. Like you'd have to bend space-time in order to even physically complete all the tasks, even if you were a first-class multitasker wearing amphetamine-powered rocket skates which sad to say I am not. A lot of the time, day-self looks at the gargantuan to-do list that night-self has cooked up, shakes her head, and winds up playing Puzzle Quest until noon, when she decides it's probably time to tackle at least SOME of the list. 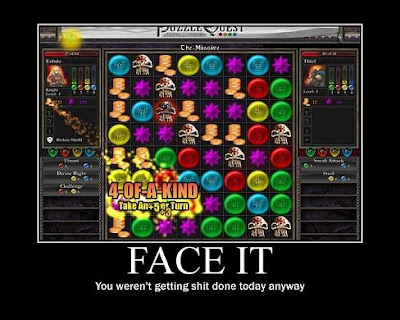 Generally, the easiest tasks get done first, with "harder" tasks shuffled to later and still-later slots in the to-do list. Normally, if something has been shunted every day for a week, it drops off the list entirely and is either completed by my husband or reappears much later.

In my quest for guides to writing the perfect to-do list or learning how to clean my house (because I don't ever actually notice the house is dirty unless it's really, really bad), I came upon a website called Flylady that promises a simple, structured routine for cleaning your home and keeping track of chores, designed for easily-distracted "home executives." Flylady is written by a real-life Jean Teasdale, and it is hilarious. Take a look at the website, which hasn't been updated since, I assume, 1999. (It is, however, sadly missing an animated construction worker GIF.) In some ways, I feel like a jerk for laughing at this website because it does help a lot of people, but in most other ways... come on. If you don't have the knowledge to do it yourself, it costs maybe $1000 to create a well-designed, accessible, attractive website, which a best-selling self-help author could easily afford.

But, seeing as how I truly AM in need of someone to tell me how to clean my house and run my life, I hung up my poor-web-design snobbery and decided to give it a shot. I signed up for the email list, which is even more hilarious than the website, but also sad. (Sadlarious!) In one email, "the Flylady" says that women never deserve physical or sexual abuse, but that if you're experiencing emotional abuse, it's probably because you're a shitty wife. Or you have a bad attitude. Let's turn that frown upside-down! There are emails about the ways in which "flybabies" pamper themselves, which for one woman means spending an extra dollar on dishwashing liquid that contains aloe vera. Man, what a selfish harlot.

One of the starting "rules" of Flylady is "dress to shoes." The rationale for this, according to the official website, is that "you are more professional." As it stands now, I'm not exactly a captain of industry, so I figured I'd give it a shot. This lasted a month.

With my shoes on, I'm always on edge, which I guess is kind of the "point." I certainly wasted less time. But it also made me sort of anxious; I could never relax enough with shoes on to read a book or work on creative projects. (Although considering that the creative projects of "flybabies" begin and end at non-ironic needlepoint portraits of Jesus, perhaps I was not intended to factor this into my decision to stop wearing shoes 24/7.) My husband also said he found wearing shoes in the house to be "creepy" and after some thought I had to concur. Although perhaps it's not as creepy as trivializing emotional abuse.

In addition to self-help tips, Flylady also hawks quite a few very overpriced cleaning tools on her website, including a $10 lanyard, $15 kitchen timer, and perhaps most egregiously, the "Rags in a Bag" set of purple microfiber cloths that "make you feel like royalty" whenever you use them. And clearly, people do, according to the many glowing "testimonials" sent in by her legions of readers, who count themselves so blessed to be "brainflywashed" (the site's term, not mine).

To be fair, the site/emails do have a few good tips, like cleaning in fifteen-minute increments to avoid distraction, and designating certain days of the week for certain chores. But, like the center of a Tootsie Roll Pop, the wisdom is buried deep in a pile of sour-tasting confection that makes you fling brown spittle everywhere if you talk while you're eating it, and you can't take it out of your mouth because there's nowhere to set the thing down, and you can't bite down on it because you might break a tooth and man, you really don't want to go to the dentist because he'll yell at you for going three years without a cleaning. And then when you get there, it's an anticlimax, because the Tootsie Roll isn't even as fresh as the individually-wrapped ones, and you're not a fan of Tootsie Rolls anyway.

But do keep a to-do list. Because nothing makes one feel more accomplished than drawing a line through all one's accomplishments and then visualizing The King of All Cosmos praising, yet also denigrating, your efforts for the day. 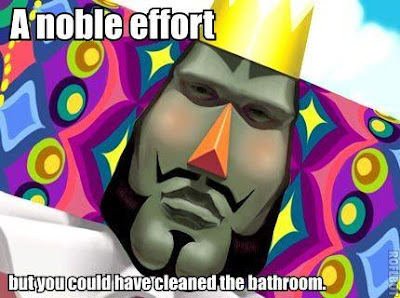 Email ThisBlogThis!Share to TwitterShare to FacebookShare to Pinterest
Labels: clean all the things, listomania, snark huntress