BUSTED SYNAPSES Has Been Released (for a week) 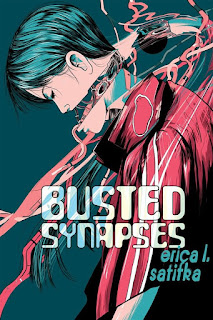 One week ago, while one of the many storylines of this strangest of years reached its climax, my novella Busted Synapses made its debut. If you're like most people in the twenty-first century, you've already seen my frequent posts about Busted Synapses on Facebook, Twitter, my mailing list, that courier pigeon outside your window, etc. And now you're reading about it here too!
Eternal thanks to Scott Gable at Broken Eye Books for bringing this book and its amazing cover to life. This is a strange little book set in a world I hope to return to again, described by one person on Twitter as Hillbilly Elegy meets cyberpunk. Hey, I'll take it. (And for some background on the setting and why I chose to write a "rural cyberpunk," check out my Big Idea essay.)
Here's a couple reviews I've received so far:

"A superb example of dystopian, cyberpunk f lash fiction that echoes William Gibson’s Neuromancer, this volume may be slim but it packs a punch." --Library Journal

You can pick up Busted Synapses on Amazon (including Kindle), Powell's, or the Broken Eye Books website. You can also request it at your local library, even if you did buy it elsewhere. That would be really awesome, actually.

Now, onward, into our terrible future!