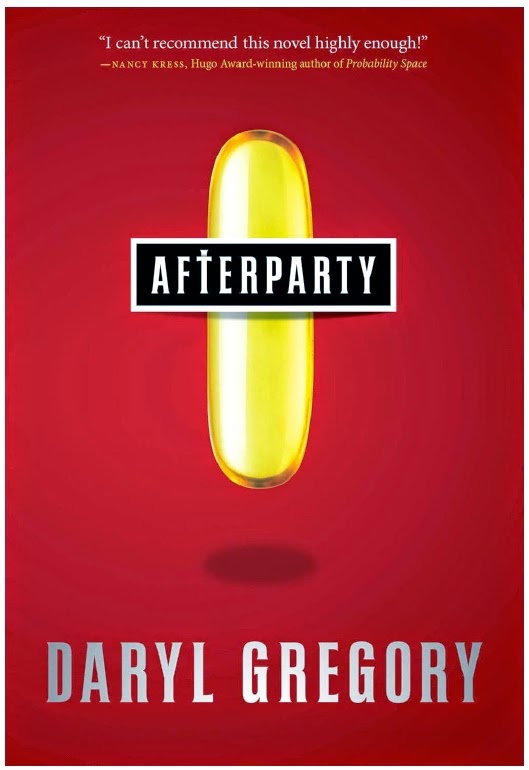 Neuroscientist Lyda Rose has just learned that the experimental drug which drove her crazy and caused her wife to be murdered is loose in North America. The drug, codenamed "Numinous," causes users to experience a hallucination of God, and to believe in it. Lyda breaks out of the mental health facility where she's being detained to find out the source of Numinous and stop it from spreading. Part near-future science fiction, part murder mystery, Afterparty is a novel for anyone who likes smart fiction.

I first discovered Daryl Gregory's writing in 2012. Searching for novels recommendations, I went to the list of Philip K. Dick Award nominees and checked out some of the synopses. The one for The Devil's Alphabet stood out to me, and I fell in love with the novel. I went on to read the rest of Gregory's output very quickly (always a marathoner) and was just as impressed, particularly with Pandemonium, which was hands down the best novel I read in 2012, holding my attention despite a general preference for short stories. So when I read that Gregory was working on a novel that combined my two favorite subjects, recreational pharmaceuticals and spiritual inquiry, I was immediately intrigued. And then I had to wait a year and a half! Such is publishing, I guess.

Like his previous novels, Afterparty delivers healthy doses (so to speak) of philosophy, well-rounded characters, and not a small amount of dark humor. That's especially true when describing the many pharmaceuticals in use in his near-future setting, like the sexual orientation-altering drug "Flip," which straight frat boys use to have a night of raunchy sex with their buddies. Another example is the apartment rancher/hired killer Vincent, who uses a designer drug to strip away his moral code. I get the feeling that Gregory is using these drugs less to make commentary on (prescription) drug culture than he is to investigate the mechanisms that make us what we are, and how easily biology can override what we believe to be true about ourselves.

Gregory's damaged characters are painted with great detail, from the driver Bobby (who wears his consciousness in a plastic aquarium toy around his neck), to Lyda's girlfriend/co-conspirator Ollie, whose paranoid tendencies were solidified with a drug that causes her to see patterns in everything. Lyda and Ollie sneak across the Canada-America border to investigate the spread of Numinous, but the conspiracy goes deeper than they think--all the way back to the five scientists involved in the creation of the drug and the fateful afterparty that left one of them dead and the rest of them locked into a permanent relationship with their unwanted spiritual guides.

The book is structured like a thriller, but the real meat is in the philosophical questions Gregory brings to the table. Is God only a chemical reaction, and if so, does that make the spiritual experience any less valid? (We are our minds, after all.) How do you regulate drugs in a world where everyone can be an amateur neuroscientist? While it doesn't have the same kind of world-shaking conclusion that Pandemonium did, I was still blown away by the ending, which features a crucial and surprising choice by the atheistic Lyda about the nature of drug-induced faith. It's also a diverse novel, with a lesbian protagonist and a rainbow of characters much like one would expect to populate Toronto a generation from now.

Afterparty by Daryl Gregory gets my highest possible recommendation, but then, I have a severe soft spot for philosophical writing and drug novels. (Like I told Rob when reading him the synopsis, "it's like it's written for me!") This is kind of like a novel Philip K. Dick himself would have written if he'd been allowed to edit and hadn't had hang-ups about women. Thanks to Gregory for writing it, and to NetGalley for the advance copy.
Posted by Erica L. Satifka at 8:00 AM