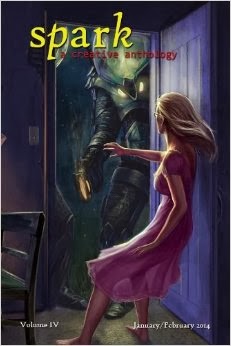 First, a sale: my flash fiction piece "Real Plastic Trees" will be appearing in the upcoming speculative fiction issue of Spark: A Creative Anthology, alongside such writers as Alex Shvartsman, Annie Bellet, Brad R. Torgerson, and more! You can pre-order it here at a discounted price, if you'd like.

I just finished writing a novella, my first stab at long-form writing in over six years. And you guys, I... kinda hate long-form writing. I wrote no short stories while I was in the process of writing the novella, and I really miss the instant (or maybe not so instant) gratification of doing that. Yesterday I had a large chunk of time blocked out to finish two short stories, but I just couldn't work on them. My brain felt completely fried, everything felt hopeless, everything I put down felt stupid and wrong. This is not unlike the problems I had after finishing my novel. Hopefully I don't quit writing for as long this time! I'm not going to unilaterally say that I'm never going to write a piece of long-form fiction again, but it will be awhile before I try it.

Plans for the great Baltimore-to-Portland move continue apace. Nothing new to report, but I have decided to start a new tag, "movelandia," which might give some of yinz a glimpse into the coast-to-coast moving process. I may also then compile the posts into a zine because there is nothing more Portland than writing a zine about moving to Portland and that will help me acculturate into my future home*.

In topical news, Crossed Genres magazine is in need of your help! They need to get 300 more subscriptions before the end of the year or they'll have to close. It's a great magazine that publishes a ton of new writers (at professional rates) and subscriptions are only $15/year for the digital version. In the common exchange rate of the times, that's only four visits to Starbucks, or one semi-fancy dinner out, or one-thousandth of the cost of a new car! (Seriously, don't do this.)

Also, as this is my first year as a SFWA member, I will be voting for the Nebula Awards for the first time ever. If you have a short story or novelette you'd like me to consider, feel free to link it in the comment section, or email a copy to satifka at gmail dot com if it's not available online.


*Real talk: when we were talking about what city to move to, I wondered if I'd fit into Portland because I'm not nearly as involved with zines as I used to be. "Do any fiction writers live in Portland?" Ha-ha. Hahahaha. Ha!
Posted by Erica L. Satifka at 11:02 AM