It's perhaps typical of the way I conduct my "writing career," and indeed my entire online persona, that as soon as I got to the point where I got a dozen or so hits on this blog a day, I immediately stopped posting. What can I say, other than that updating a non-LJ blog feels way too much like performing in front of a live audience and takes away from the time I spend doing "real" writing.

But anyway: updates! I sold a story to PodCastle, so look for "The Hand of God" to invade your auditory canals sometime in the early fall. This is the first time my writing has been adapted to the form of a podcast. I hope to be in smells by late 2014.

Also, my zine distro is still running (though not accepting any new submissions -- when I'm sold out I'm sold out for good!), so maybe check it out? I'm also probably going to whip up something in time for the DC Zinefest, though I'll probably not be tabling since someone (uh, me) didn't register in time. But I'm easy to spot: just look for the lady with the fresh tattoo of two Jeffrey Brown-inspired cats riding a tandem bike on her right arm. 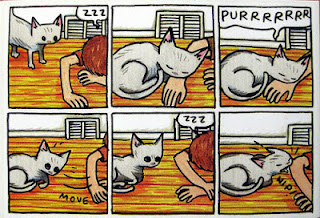 Some other things I've been doing/reading/etc:
**Read Daryl Gregory's Pandemonium, which is if anything even better than The Devil's Alphabet. Man, if you aren't reading this guy right now you're a chump.
**Reading Robert Jackson Bennett's The Company Man. Remember the kerfuffle on Twitter a few weeks ago about steampunk being fascism for nice people? I only vaguely do, since I mostly use Twitter to keep up with the antics of John Darnielle and DadBoner. Anyway, if you're tired of steampunk about aristocrats this is the cure: Bennett's steampunk is dirty and political, showing us the lives of the crooked company and the corrupt union that fuel a magical city made of gears, gaslights, and wonder. Despite a slow start, recommended!
**Going on a trip to western North Carolina, which included camping in the Blue Ridge. Note to self: next time bring mattress.
**Working on a short story about generation ships, and also misery.
**Eating food, breathing, sleeping. You know, human stuff.

Anyway, see you in a month I guess!