Last weekend, just because we could, Rob and I took a weekend vacation to East-Central PA. The highlight of the vacation wasn’t the tiny alternative comic-con we went to on Sunday but, instead, a trip to Centralia.


Because not everyone knows the story: up until 1964, Centralia was a hamlet in the heart of anthracite coal country. Somehow or other, the coal underneath the town caught fire, and the town had to be evacuated and the residents paid off, except for the dozen or so stragglers who stayed behind, because one’s town being on fire is merely a small, temporary imperfection along the lines of having to deal with a drum-playing neighbor and isn’t the kind of thing you should, like, run away from as fast as you can. It’s the inspiration behind the movie and video game “Silent Hill,” which I’ve never seen or played, and also the Simpsons episode where they have to move Springfield because it’s taken over by a landfill. (Ix-nay on the asshole-tray!) In addition to rousting out the last Centralians, PA also knocked down the last houses, which is kind of a shame because you don’t really get the same ghost-town effect when it’s just a collection of broken foundations. There’s enough coal under Centralia to keep the fire going for another two hundred years, and it’s likely to swallow up a few other towns as it burns. So, now you know.

The first thing you run into when you finally find Centralia (this is a challenge!) is the interstate, closed due to damage, which you can walk on:

This stretch of interstate goes on for around a mile, and is covered with graffiti, which ran the gamut from the bigoted: 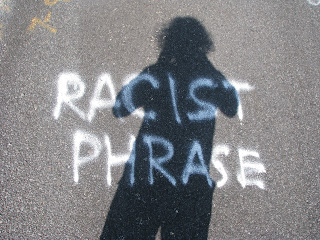 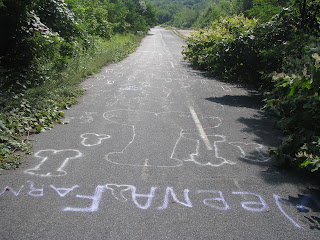 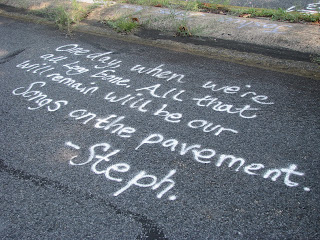 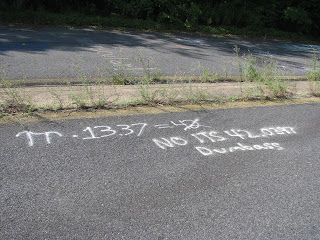 There are also three well-kept cemeteries, including this small Orthodox one: 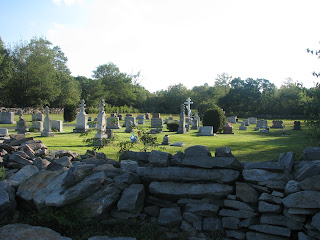 And then the town site itself, which doesn’t look like much anymore since they tore down the houses and uprooted the street signs. But the town is where you get the best view of the fire, as you can (kind of) see here: 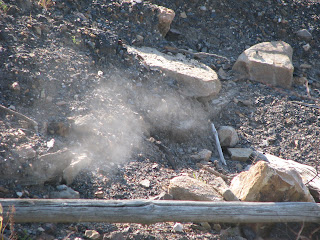 There’s also an area where you can literally put your hand into the rocks and feel the fire, which is cool as hell, and also illustrates the utter insanity of anyone who chose to remain here. If I’d had my hand in the rocks more than half a minute, I would have gotten burnt. I bet I could have fried an egg in this little rock niche: 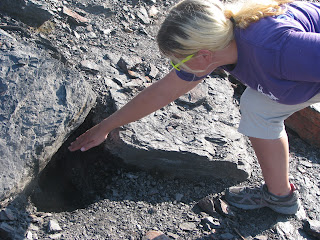 Gotta say, PA’s tourism board is really missing the boat here, though. Where are the tourist shops with T-shirts saying “My Town Burned Up and All I Got Was This Lousy T-Shirt”? Rob says it’s because “nobody wants to remember Centralia,” but the next day we went to the town of Jim Thorpe, which capitalizes on the execution of the Molly Maguires, which you wouldn’t think we’d want to remember either. Nobody even died in Centralia! I mean, it’s certainly not a pleasant history lesson, but it’s interesting, and we ran into a dozen other people while we were there (including two guys who drove Jeeps onto the broken interstate!), so clearly there’s a market for tours, knickknacks, and other things to drain rubberneckers’ pockets. I have ideas, PA! Call me!

Ultimately, I came away from this trip struck by how many differences there are between Western and Eastern PA. We’re bituminous, they’re anthracite. We put French fries on our sandwiches, they have a lot of Amish people. Like two different planets, really. I was also struck by just how empty a lot of the eastern part of the state is. Except for Pittsburgh, Western PA is pretty rural, but not to this extent. There was just a lot of nothing from Centralia all the way down to Philadelphia, which became very concerning when it came time to find a motel. So, go to Centralia, but get a reservation first! This message brought to you by the Centralia Tourism Board.
Posted by Erica L. Satifka at 5:58 PM