Last Friday I got a new addition for my bike: a rear rack. I had wanted a bike that came with one pre-installed, but as my bike (a Raleigh Venture 4.0) is pretty much perfect in every other way I didn't stress too much about not having a rack. After all, would I really be using it for shopping that often?

As it turns out, I use my front basket A LOT. I don't (previously can't, hopefully someday will, but for now don't) drive, and carrying items in the front basket is a lot easier than throwing everything on my back. My front basket (a Wald quick-release one) holds a fair amount of stuff, but there are some things that are too unwieldy or surpass its weight limit. Thus, I would need to get a rack.


I rode out to the bike store (Performance Bike) at Perring Plaza in Towson, which was probably a mistake. Once you get outside the few blocks that constitute the "city" of Towson, this area is not at all bike-friendly and that is especially obvious when you're foolhardy enough to attempt to actually explore the area. Most of the sidewalks did not have curb cuts or were inexplicably replaced with gravel, and riding on the road is out of the question, as the speed limit on the main road is 40 (which means 60) and there are tons of huge trucks. There are no back routes. Welcome to suburbia! I wound up walking most of the way, although the sidewalk is scarcely any better for pedestrians and I encountered no other pedestrians. The best part of the trip: no bike rack outside the bike store. Based on the dumbfounded expressions of the dudely workers when I rolled my bike into the store, I wonder if I am the only person who has ever shown up at the bike store on a real bike. Brings to mind the "put a bird on it" Portlandia sketch for some reason.

(The bike store itself was really disappointing. All racing bikes, and mostly men's racing bikes. There was a small accessory section which did have a passable rack, which made the trip worthwhile. But I would not recommend this store unless you are male and also want to be Lance Armstrong. And you should probably drive there.) 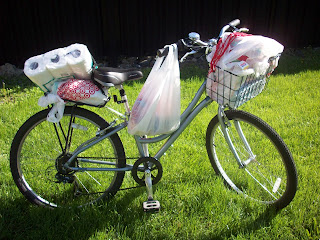 The rack (a "Trans-It" model) fits fine, except for a slight slope toward the seat, although as it turns out that slope is helpful in terms of keeping stuff from falling off the back of the bike, as the stuff sort of slides down the rack and wedges against my back. On its inaugural shopping run yesterday, I was able to fit a large bottle of laundry detergent and a 12-pack of toilet paper on there, as well as a full basket in the front and a loaf of bread hanging off the handlebar (and more stuff in my messenger bag). Hardcore! I doubt I'll load it up as full again, at least as long as we're living in the suburbs (hopefully only for another 2.75 months), since I did get honked/yelled at a couple of times and I think I need to work out a better system of ties, although I didn't have to stop to readjust at any point. And I still want to find some panniers, since I think I'll enjoy shopping a lot more with them vs. tying everything to the rear rack with a bungee cord. But on the whole, Operation Ridiculous Bicycle Load went off without a hitch.

The bigger question is WHY I do these kinds of things, since we do after all have a car, even if I can't take it out alone. It probably has everything to do with feeling inferior because I don't/can't drive, and having spent all of my life before I moved to Pittsburgh living in areas where that wasn't just a quirk, but a real problem that has cost me jobs and educational opportunities and fun times. One thing that annoys me about the "car-free blogosphere" (and yes, there is such a thing) is that it's so often framed as a choice, which for the vast majority of car-free people, IT IS. And I'm glad that people make that choice! Driving is sort of awful and so is the expense of keeping up a car, and if everyone who could drive did so all the time at the expense of other forms of transportation, the roads would be even less safe for pedestrians and cyclists, and there would be no public transportation anywhere (as opposed to just most areas). But a driver who doesn't have a car can always choose to get one. They don't have (emphasis is important) to turn down a job just because of transportation issues (something I have had to do many times), or factor transportation into their decision of where to live. And yes, not everyone who can physically drive a car can afford one; I won't be able to afford my own car (if I even wanted one) once I potentially get my license in October. At which point I will become one of those whiny car-free-by-choice people I'm complaining about. Oh well! My point is, the option is still there in a way it's not for people who cannot drive.

So, in a roundabout way, I guess that's why I choose to make grocery runs by bike even though we could do it so much easier by car. It's a way of proving myself, showing that I can do useful things even though I don't have a driver's license and all the lack of self-worth that comes with that. It's something I can do without anyone's assistance, and is therefore important to me as a person who is hyper-independent to the point of dysfunction. Besides, toilet paper just feels so much softer when you bring it home on the back of your bike.

Email ThisBlogThis!Share to TwitterShare to FacebookShare to Pinterest
Labels: excursions in pedaling, traipsing down controversy lane