Sometimes I find myself with the need for a product that, due to my admittedly limited engineering skills, I am unable to build for myself. So if you're a DIY go-getter with time to spare, or a business contact with money to burn, consider funding this project which will enhance the state of discourse for years to come.

This product is a handheld record scratch sound effect.

Dear potential collaborator/investor: how many times does this happen to you? You're minding your own business at your driving school classes, because due to various life circumstances and neurological difficulties you haven't gotten your license until the advanced age of 29 and that is nothing to be ashamed of or so they say. You're talking about reasons why teenagers shouldn't drink, and even though you've been able to drink for eight years and you're basically a teetotaler, you're still paying attention because your state is wackyface and you need to complete teenager-geared driving school in order to get a license. And all of a sudden, your driving instructor pops up with this gem of an anecdote:

"So there's this lacrosse player, played for Name Redacted High School*, and he went to this party and had too much to drink. And he ran into his ex! And they went back to his apartment, and they had even more to drink, and the next morning she goes and calls up the cops and says he raped her! I mean can you believe it?! But it's okay, he got off, but something like this can mess up your future, kids. So don't drink!"

Now, this is the kind of base dickery that a well-timed smack on the desk or a walk-out is generally used for. However, I don't think that these low-tech solutions really make one's opposition clear, at least, not in the same way as a blast from one's handheld record scratch sound effect, which I am tentatively christening DJ Objectatron 9000 for convenience's sake, but I'm sure that whatever marketing firm we decide to go with can find a better name.

The DJ Objectatron 9000 is obviously well suited for a crowd or classroom situation. But it can also prove useful in tete a tetes! Observe, what happens in a conversation between a hypothetical driving school pupil and her deskmate:

Deskmate: (some high school drama that our hypothetical 29-year-old heroine couldn't care less about)
HDSP: Mm-hmm.
Deskmate: And you know, there's a lot of fights at my school, because there's a lot of black kids that go there.

Awkward! While this is a situation that strongly benefits from a smartphone near at hand, it is a situation that would benefit even more by the quick application of DJ Objectatron 9000, dialed to a lower volume. The objection is made clear to everyone, the situation is defused, and one would not have to pretend to be really interested in the apps on one's smartphone for the next ten minutes.

Because every product eventually has to have an upgrade, there is also an optional two-button DJ Objectatron 9000, for when a slightly different flavor of sarcastic disapproval is needed. This is a button on the opposite side of the device, keyed to say the phrase "Say what?" This is ideal for situations where you're not so much halted in your tracks with a horrible statement, but more to point out crass hypocrisy in action. Allow me to demonstrate with another statement from a hypothetical driving school instructor who is by the way not hypothetical AT ALL:

"Now, when you go out you need to know your limit. I know that I can drink four beers and be under the legal limit, just under that limit, but you don't know how much alcohol you need to drink to get at that limit. Now let's watch this film about a girl who ran over her best friend after drinking one beer."

At this point, a quick toot of the "Say what?" button does the trick, even if the offender does not respond. Your point is made, which it might not be if you were to respond orally, since at this point he's already made the rape statement and you're apoplectic with rage and you know that if you open your mouth, what comes out will probably get you arrested. 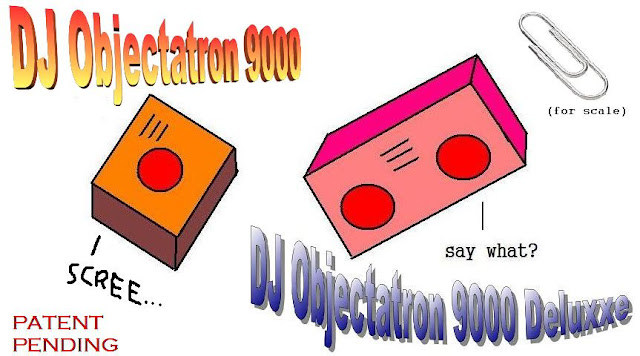 So, my potential investor and/or collaborator, I'm sure you can see the great benefit that comes with investing in DJ Objectatron 9000 (and I am so not married to that name). Feel free to contact me on my Twitter feed. I think this could be a lucrative business opportunity for us all.