Last night I went to my first driving class.

As I've pointed out many times before, Maryland has an exceptionally tough set of hurdles you have to jump in order to get your license. You have to wait nine months after getting your permit before you can take the driver's exam, regardless of age (which means I may not be able to get a job for the entire year of 2011). And everyone has to take driver's ed, also regardless of age. Which means that I must spend thirty-six hours learning and growing as a motorist with people who were born after the death of Kurt Cobain.

It's probably going to be the most humbling/embarrassing experience of my entire life.

Anyway, it's me, six high-school-aged girls, and one high-school-aged boy. (I know they are all in high school because the instructor went around and had us introduce ourselves by name and school. "Hi, I'm Erica, I was born in Ronald Reagan's first term.") First, we watched a videotape (yes, VHS, and I'm guessing that only me and the instructor know how to even operate a VCR) called STREET SMART. The letters were formed out of actual streets, which is the kind of thing I find hilarious. In STREET SMART, a "guardian angel" dressed like Kid and/or Play counseled a number of rich white kids about staying cool on the road, paying attention, etc. while they huffed about and looked bored. At one point, one of the teenagers whined to his father that he didn't want to pay a toll because he's saving up for a Walkman. I wanted to pipe up and say "that's an iPod for my generation, kids. Also, did you know that stamps used to cost thirty cents? We used them to send this stuff called mail, which is like an e-mail, except you can hold it in your hand! Oh, what golden days those were."

During the break, one 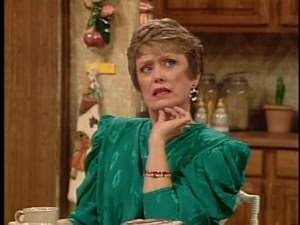 of the girls started talking to me, unaware that I am a few short months away from the big 3-0. I told her that I'm "way out of high school, but thanks for the compliment," and was then immediately mortified because wow, isn't being pleased that you look younger than you actually are something that old, vain women do? The kind of women who go to the bar at Red Lobster in dim lighting hoping to be carded, and then they ARE carded, but only because the waitstaff aren't dummies and know they'll get a better tip? The kind of women who self-identify as cougars? Just call me Blanche Devereaux.

After the break, we watched a less-hilarious videotape about teen driving deaths, which are the basis behind MD's draconian permit laws, and I was again reminded of how ill-equipped most states are to handle us elderly "rookie drivers." It's not that I think they should cut me some slack just because of my age... no actually I DO think exactly that. But the examples both the teacher and the video used were setting me up for this revelation: all these cautions about not driving after midnight to parties don't mean much when you're a boring married almost-thirtysomething, let alone "cruising at the mall" or playing "chicken." I may be less mature than most people my age (judging by how hard I laughed at a roller derby player with the name "Jenn Italia" at the match last week), but the days when I could be a demon behind the wheel are far behind me, and it's sort of frustrating to have to go through the same lectures as if my life experiences don't color my attitudes toward driving and as if I need the same amount/type of guidance as a teenager. I may only have a permit, I may still look like I'm in high school, but I can buy a Lobstertini without a fake ID, dammit!

I sort of think that there needs to be a driving-instruction videotape geared to the 25-and-older set, STREET SMARTER (the logo is also made out of streets except they are worn down and broken in parts, because they are older!). It could cover such topics as:

● how to cleverly conceal your lack of a driver's license from potential employers!

● how to structure your entire life around your deficits!

● In the movie Inception, why didn't Fischer recognize the people around him on the plane after he woke up? Why didn't Saito just buy Fischer's corporation, or have Fischer killed? Why didn't the free-fall gravity affect the people in the snow dream? And why couldn't Leonardo DiCaprio just fly his kids to France instead of hatching a complicated reality-bending scheme to get back into America?

● If a man on steroids dressed in a shark suit fought a sick gorilla dressed in a bear suit on the moon, who would win?

It can even be a cautionary tale for those fresh-faced new drivers born during the awful aughts: don't be like us! Get it while you're young! Otherwise, you're going to have to sit in a class with people twelve years younger than you who listen to their music on hyperboxes surgically implanted into their skulls and are ruled over by a wise android known as Benevolentus XII, who is definitely not a human killer. No sirree Bob.